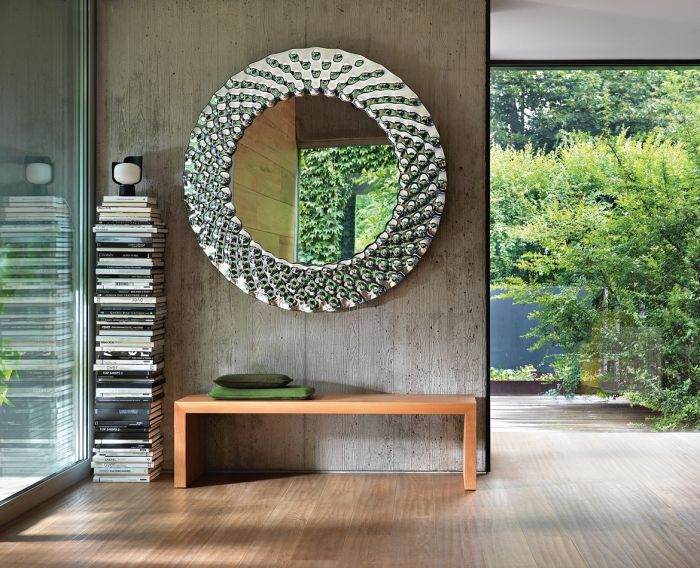 Even as very young, Vittorio Livi already loves everything about glass, its solidness and fragility, its simplicity and complexity; he regards it as an ancestral material, yet at the same time innovative, eco-friendly and very practical.

In the furniture world, glass was mainly used to make small complements or decorative items, but for the young Vittorio Livi it’s a material with great potential, and thus his dream takes shape: FIAM is born, a single whole with his passion, a fusion of tradition, innovation, handwork, design and research, for a constant commercial and cultural wager.

Glass: the sole protagonist of furniture that astonishes and fascinates. Furniture that time doesn’t leave a mark on: its uniqueness, presence and fashion will remain unaltered wherever and whenever.

Each professional works in perfect harmony, knows how to plan and find various solutions to every single case, how to control the shapes and ensure the success of the operation of each object, a success that is achieved thanks to highly sophisticated and unique technologies.

With the role of the Designer, FIAM is boundless: it’s a gamble, it’s a constant challenge for the realisation of any idea.

FIAM gathers proposals and projects, creating, if necessary, new machinery to make their realisation possible. A few examples: in 1982, Massimo Morozzi proposes the Hydra coffee table, and a few years later Philippe Starck draws the project for the Illusion table – in the first case the ‘Passer’ machine is born, capable of pushing water and abrasive dust at a speed of 1.00 meters/sec, whereas for the Illusion table the company had to create a machinery capable of reaching 1000 degrees.

For FIAM, the seventh generation of curving machinery is already in the rear-view. FIAM looks constantly and ceaselessly to the future, so its challenge goes on.

FIAM stands for being open and available to accepting daring proposals at any time, accepting emerging worker roles and brand-new innovations regarding technologies and materials.

FIAM the magnificent dream lives on!

Marcel Wanders was born in 1963 in the Netherlands and graduated with merit at th Arts School in Arnhem in 1988. His fame started with the iconic Knotted Chair that he projected for Droog Design in 1996. He is now working for the most important contemporary design companies in Europe.

In 2000, he founded Moooi, which soon became a world-known brand, and he worked at the same time on interior design projects, entering the world of accessories as well. In 2005, he was the director of the International Design Yearbook and in the same year, he created together with the chef Peter Lute the extraordinary hospitality concept Lute Suiters. He has also projected the interiors of Blits, a new restaurant in Rotterdam and the interiors of the “Thor” restaurant in the Hotel on Rivington in New York. It includes coffee bar, lounge and private club. Marcel is the first and still today among the most important designers of Droog design and he has been member of the jury for different international prizes such as the Rotterdam Design Prize (for which many of his products have been nominated several times) and the Kho Liang Prize. He has lectured at the SFMoMA, Limn, the Design Academy, Nike, IDFA, FutureDesignDays and had taught in different design academies in the Netherlands and abroad.

A significant number of Marcel Wanders’ projects have been choosen for the most important collections and designexhibitions worldwide such as the Museum of Modern Art in New York and in San Francisco, the V&A Museum in London, the Stedelijk Museum in Amsterdam, the Boijmans van Beuningen Museum in Rotterdam, the Central Museum in Utrecht, the Decorative Arts Museum in Copenhagen and different Droog Design exhibitions.